Lyme disease in Australia – treatment for a controversial disease 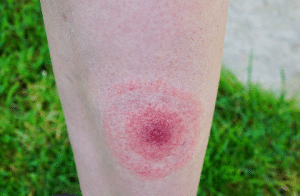 For many years Lyme disease was thought only to exist in the United States however evidence is now mounting that the debilitating disease is infecting people right here in Australia.

In 2012, the Lyme Disease Association of Australia reported that over 200 people in Australia had tested positive for Lyme disease with the majority of these living on the eastern seaboard. Just over half of the respondents in the survey claimed to have not travelled outside of Australia in the period immediately before their symptoms first presented.

Despite this, over the past decade debate has raged over whether the disease had spread to our country. That debate came to a head late last year with the release of the findings from a federal government inquiry. The inquiry found that, “… potentially infectious pathogens are being transmitted by Australian ticks, and treatment for the ensuing illnesses is currently suboptimal.

Why is treatment in Australia ‘suboptimal’?

There is substantial scepticism in Australia’s medical community as to the existence of Lyme disease in this country. Tests for Lyme disease on Australian patients are often inconclusive, for reasons explained later in this article. In addition, the pathogen that causes Lyme disease has not, to date, been detected in Australia’s tick population – tick bites being recognised as the leading cause of the disease.

As a consequence, many health professionals believe the Lyme disease-like symptoms that present in Australian hospitals and clinics can be attributed to other causes such as fibromyalgia or chronic fatigue syndrome and are treated accordingly.

What is Lyme disease?

Lyme disease is caused by an infectious pathogen usually transmitted by a tick bite (Borrelia burgdorferi (Borrelia). It was named after a town called Lyme in Connecticut, U.S., the home of a large number of children who, in the early 1970s, suddenly presented with symptoms of what we now know as Lyme disease.

In 2012, Lyme disease was included as one of the top ten notifiable diseases by the Centers for Disease Control and Prevention (CDC) in the United States.

What are the symptoms of Lyme disease?

According to the Karl McManus Foundation, a not-for-profit foundation set up to research and educate people about the disease, the more common symptoms of Lyme disease include:

There are tests for Lyme disease however the reliability of these tests is open to debate.

Pathology testing for Lyme disease is unreliable for a number of reasons:

The most common form of testing, antibody-based testing, has been shown to be particularly unreliable. Research conducted by the National Institute of Allergy and Infectious Diseases  found that less than 50{648ff2b140dd79f8b10f01740237e66061b7c0f8b396ba52d99047c684c8722c} of the patients with erythema migrans (the red rash associated with the early stages of Lyme disease) tested positive when their symptoms first appeared. As the disease progresses the rate of detection increases, however early detection is crucial to successful treatment outcomes as we’ll discuss below.

Some claim that PCR testing (polymerase chain reaction assays) is a more reliable method, however it is also more expensive than antibody-based testing and there are question marks over its usefulness.

How can Lyme disease be treated?

Lyme disease, even in the U.S. where it has been known for decades, is a notoriously tricky thing to treat. If the disease is detected early, a course of antibiotics usually proves successful in killing off the pathogen. If left for too long however, antibiotics appear to be less effective and health professionals are faced with a much more challenging situation.

The challenge comes from the wide and varied rage of symptoms associated with the disease. Sufferers may present with all the symptoms or just a selection, and that selection differs from person to person. The onset of secondary, previously unknown allergies sometimes occurs due to the patient’s compromised immune system. The already knotty situation is further complicated by the herxheimer reaction, which occurs as the body tries to cleanse itself of the toxins released by the dying Borreilias. This detoxification can often lead to severe flu-like symptoms such as body aches, hot and cold flushing, nausea, joint and muscle pain, sore throats and headaches.

All of these factors make it impossible to develop a singular medication or treatment plan that works for everyone. Treatment plans needs to be customised to suit the exact needs of the individual patient.

Most analgesics, antibiotics, vitamin and nutritional supplements used to treat Lyme disease are oral medicines which must pass through the gut and enter the blood stream to take effect. This presents immediate and obvious problems for Lyme disease sufferers, most of whom suffer from highly sensitive gastrointestinal systems. A compromised gastrointestinal system can interfere with absorption of the medicine and irritation to the gut caused by ingestion may exacerbate symptoms.

Dyes and preservatives are commonly found in off-the-shelf medications, which can also cause havoc with the gastrointestinal systems of Lyme disease sufferers.

This is where a compounding chemist can help

If you believe you may have the symptoms of Lyme disease, we recommend you first see your doctor to rule out other possibilities. You can also speak to one of the friendly team members at National Custom Compounding today about treatment options. If needed we can also put you in touch with a holistic doctor who can work with you to develop a diagnosis and treatment plan.